President Klaus Iohannis will have official talks with the President of the European Council, Donald Tusk

President Klaus Iohannis will have official talks with the President of the European Council, Donald Tusk, at Cotroceni Palace. The discussions take place before the European Union summit on Thursday and Friday in Brussels, during which the leaders in the community space will mainly analyze the reforms demanded by Great Britain, which wants especially limiting social benefits granted to workers coming from other members of the European Union. Ahead of the European Council, representatives of the Visegrad countries will meet today to coordinate their positions. Czech Republic, Hungary and Poland, which have a total of 1.1 million workers in the United Kingdom, oppose any discrimination in the treatment of foreign labor. (RADIO ROMANIA reports)

Romanian Foreign Minister Lazar Comanescu will attend the meeting of the Foreign Affairs Council (FAC) in Brussels. Among the topics of discussion there are the situation in the Republic of Moldova and ways for the European Union (EU) to support this country, the prospects for EU relations with Belarus and recent developments in Syria, from the humanitarian perspective.
According to a press release from the Ministry of Foreign Affairs, Lazar Comanescu will be part of the official delegation that will accompany Prime Minister Dacian Ciolos on his official visit to Brussels, where he will meet with high-ranking European officials.

A hospital supported by a NGO bombed in Syria

A hospital in northern Syria, supported by the French NGO “Médecins sans frontières” (MSF), was bombed on Monday, February 15th. The hospital is located in Marat Al-Nouman, 280 kilometers away north from Damas. Nine people, including one child, were killed.
During two series of attacks, the hospital was hit by four rockets, according to MSF. At least eight staff members are missing. Massimiliano Rebaudengo, the assignment manager, affirms that the attacks were intentionally against the health body. The destruction of the building deprives 40 000 people of medical care.
The humanitarian organisation has been set up in the country since 2012. It manages six hospitals in Syria and it is active in 153 other health centers in the country, including five centers which have been attacked since the beginning of the year. MSF has been supporting Idlib structure since September 2015, especially by supplying medical equipment and covering surgery costs.
Another hospital was also hit by a land-to-land missile, in Azaz, near Alep. According to Syria Charity, the NGO that manages it, this was the second time it was attacked. One person was seriously injured, according to a first assessment. The structure had already been evacuated, patients were in a safe place underground after a first hit.
Russian airplanes launched numerous air strikes these weeks in Idlib and Alep region, in support to Syrian government. Last Sunday, Barack Obama, the President of the United States, called on Vladimir Poutine, the President of Russia, to put an end to this bombing. (www.lemonde.fr, www.liberation.fr)

The embargo about the existence of the gravitational waves broken…
by a cake.

As many scientific announcements, the one about the discovery of the gravitational waves was prepared in advance. The results known by scientific teams and some journalists, should have been published in the Physical Review Letter and, simultaneously, presented by the scientific teams in Washington. Everything was arranged for it to be official on Thursday, February 11 at 10 am 30, Washington time (4 pm 30, Paris time).
As it’s usually the case, the embargo was broken a few minutes before. But the culprit is not a journalist or a publisher who wanted to have a head start.
It’s the photo of a cake, garnished with the announcement of the discovery, which is at the root of the leak. It was tweeted by a research assistant at the University of Maryland with an office at NASA.

Erin Lee Ryan had ordered the cake in order to celebrate the news with her colleagues. In the hurry, she took a photo and put it on line 16 minutes before the official announcement.
She explained thereafter that she didn’t realize the hour and that shooting wasn’t forbidden by superiors. Anyway, “the embargo was already broken by telling it to the pastry chef.” (http://bigbrowser.blog.lemonde.fr)

“The spelling reform passed in 1990 [would] be applied in the coming year „, TF1 reported without mentioning its source on February 3, 2016.
Indeed, in 1990, The Board of the French language (Le Conseil Supérieur de la langue française), wanted to simplify the learning of French by establishing some changes (Harmonization lexical, compound names of consolidation and elimination of some particularities such as the circumflex accent).
But the reform which has provoked lots of debate was only a suggestion as it was not mandatory. However, the reform program at the end of 2015 says: “The following texts apply spelling corrections proposed by the Board of the French language, approved by the French Academy and published in the Official Journal of the French Republic on 6 December 1990.”
This announcement has again caused angry reactions especially between the French Academy and textbook publishers. Actually, the position of the French Academy is clear: it opposes any spelling reform. While the textbook publishers decided to impose in September the reform they developed in 1990 and implemented since 2008, causing controversy.
What is certain is that the circumflex accent isn’t going to disappear. (www.lemonde.fr)

Capital of Romania, Bucharest is the most populated city in the country. So it’s no surprise that trasnports are most various.. Day and night, highways are full. 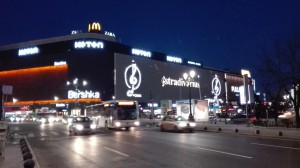 Among lots of cars, taxis are recognizable by their yellow color and they are usually used by lost foreigners. More regular people will use subway, tram or buses which serve rather well the city.

But Bucharest also overflows with great parks where many people like to have a walk or ride a bike. This balance between busy boulevards and little green paths makes Bucharest a city enjoyable for a travel.

Bucharest , capital of Romania, is full of life. Trade is everywhere: shopping malls, fashion boutiques, antique shops, souvenirs, bookstores, supermarkets and so many others. No matter who are the potential buyers – fashion lovers or souvenir fans, – sure iis that they will find them, day and night!

Ranging from small streets to the large squares (Piata Unirii, for example), the trade is everywhere, even in churches! And when we say „trade”, we are also talking about all the bars, cafes, restaurants, cinemas and everything that makes Bucharest a huge and surprising city. The capital is alive all right, and that’s for sure!

Romania is a land of tradition and culture where religion is an important part. It is in the capital, Bucharest where we have seen the evidence of the various worship present in the country. Indeed, the city has lots of churches where everyone can meet and engage in private prayer.

Those places where time seems to stop, open to everyone, whether believer or simply passing, the opportunity stay away from the outside world and immerse yourself in a new culture where belief seems to be within the reach of all.