Romania’s President Klaus Iohannis is expected to address Parliament on Wednesday. The announcemment was made by Senate Speaker Călin Popescu Tăriceanu who told reporters that leaders of parliament chambers approved the move at President Iohannis’ request. The address will focus on domestic matters, Mr. Tăriceanu added. It is the fifth time when President Iohannis appears before Parliament since his election in December 2014.

Romanian Prime Minister Dacian Cioloş is expected to appear in the Senate on Wednesday after Senate Speaker Călin Popescu Tăriceanu said he wanted Mr. Cioloş to explain why the Antena TV Group should quit its studios. Senators voted 70-2 on Tuesday to bring the prime minister to Parliament to say why financial authorities have given the Intact group, owners of Antena TV, five days to evict their studios.The state confiscated the studios last year following a court ruling to recuperate damages from a money laundering case. However, Mr.Tăriceanu called the move „an obvious and brutal attempt to suppress constitutional rights”. Media tycoon Dan Voiculescu, former owner of the group, was sentenced in 2014 to 10 years in prison after being convicted of corruption but has now produced eight scientific books behind bars. A legal loophole allowed prisoners to reduce their jail sentences by writing scientific books. The get-out-of-jail-free book law was suspended last month by the acting government of Mr. Cioloş.

Moldovan President Nicolae Timofti on a visit to Romania

Nicolae Timofti, President of the former Soviet Republic of Moldova is in Romania’s capital Bucharest for a two-day official visit. President Timofti has met Romanian counterpart Klaus Iohannis on Wednesday before holding talks with Prime Minister Dacian Cioloş, Senate Speaker Călin Popescu-Tăriceanu and other senior officials. Official talks were expected to focus on bilateral relations at a time when Moldova is facing a deep political and financial turmoil. The talks will also to tackle issues concerning the reforms Mr. Timofti government needs to implement in order to access a $65 million loan promised by Romania on condition Moldova stays on a pro-European course.

Prosecutors of Romania’s National Anti-Corruption Directorate (DNA) raided homes and offices in the Transylvanian towns of Sf. Gheorghe, Covasna and Braşov while similar moves were reported in the capital Bucharest on Wednesday. The new corruption-related file could involve the mayor of Sf. Gheorghe among others. Prosecutors sealed the office of Mayor Antál Arpád who is suspected of abuse of office. Damages may hit about 1 milion euro, prosecutors say.

A Californian startup incubator, Y Combinator, announced it will pay a minimum income to 300 American citizens for 5 years. This contributes to equal opportunities and prevents wage system erosion. After Finland, the Netherlands, Switzerland and maybe France, a major actor of Sillicon Valley is questioning national income.

Since 2005, Y Combinator is well-known for having started up Airbnb, Dropbox and Reddit. Nowadays, thanks to the society earnings, Sam Altman, the CEO, wants to give to 300 American citizens a minimum income for 5 years. He explains that “this is the right thing to do” because in few decades, millions of human jobs will be replaced by robots and artificial intelligence.

Sam Altman is currently looking for an expert to supervise this study program. He or she will help project members to set one or several amounts. This will allow to compare the impact of different income levels on beneficiaries, and then notice how this income changed the beneficiaries’ mood, and life in general. The CEO is convinced that a minimum income will encourage people to take more risks. According to him, the national income would allow a decrease in costs for a good quality of life,  improve equal opportunities and reduce poverty.

The startup will also offer financial courses helping the beneficiaries to spend and save their money in a more responsible way. The beneficiaries will be chosen at random, but they will especially pay attention to skilled people from disadvantaged areas.

Eagles of Death Metal at Olympia 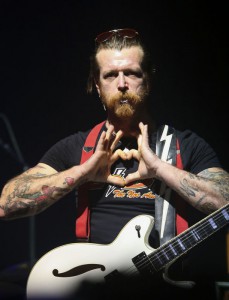 “This is the first concert of the rest of my life”

And if Josh Homme and Jesse Hughes, founder of the Eagles of Death Metal, were right when they said: if the rock’n’roll could save us? The stunner rock band – lightness West Coast, punkoïde posture and heavy rhythmic South – playing at the Bataclan November 13th 2015 during deadly jihadist attack, had not ceased to repeat that he would finish the concert.

The reopening of the hall was predicted in December, but they did not have the patience to wait and so, on Tuesday February 16th, they filled up the Olympia. All those present on November 13th were invited. Almost all of them were present.

“This is the first concert of the rest of my life” murmured Emilie (who preferred anonymity) in her soft voice. They were three friends at the Bataclan, they are all three here tonight … In the queue to pass through security checkpoints on the Boulevard des Capucines and the entrance of the hall, crutches and wheelchairs remind the violence which broke out here.

Laurent Lafont-Battesti was not supposed to be at the Bataclan. A friend had given him his place and advised him to get on the balcony. “When the shooting started, we thought initially of a stage play or a fool playing with firecrackers. The smell of the gunpowder, that’s what made us understand… “He will succeed to hide himself in an apartment above the hall.

Stories like the one of Laurent, there are as many as the people in the hall. Stories of fear, body dragging themselves to start and the unbearable mourning … On the red carpet of the Olympia, the gazes cross but flee.

But Eagles of Death Metal is a band whose works have the raw energy. Aside from „motherfuckers, how much I love you,” Jesse Hughes hardly increases the registers. That saves us the sadness of drippings.

The group had simply prepared its input: a recording Dutronc, singing “Il est 5 heures, Paris s’éveille… (Paris awakes…)”. An accomplice face to face when one feels the need for both the group and the public, to forgive and to be here, alive.

Almost one million children in Eastern and Southern Africa are acutely malnourished, because of the serious drought that touch the continent, the United Nations Fund for Children (UNICEF) alarmed on Wednesday, February 17 .

The situation is expected to worsen because of the climate phenomenon El Niño: “It is expected to decline, but the impact on children will be felt for years”, Leila Gharagozloo-Pakkala, the Director of Unicef ​​for the region, notes. And she calls for immediate decision-taking.

The volume of precipitations is well below average for two years in these areas of Africa, and harvests are poor. Consequently, prices of basic commodities increase and people face food shortcuts.

Lesotho, Zimbabwe and several South African provinces have already declared the state of emergency. UN evaluates that 14 million people will face food shortcuts in 2016 in Southern Africa. In Malawi, 2,8 million people are threatened by hunger.

According to the Office for the Coordination of Humanitarian Affairs UNU (OCHA), it will take two years for communities affected to recover from the drought aggravated by El Niño.

This phenomenon, a hot equatorial current in Pacific, reappears every five or seven years. It grew higher this year leading to draught in several areas and serious floods in others.

The rainy season, matching the Austral summer, traditionally ends in April, giving way to five-month of dry season, which means the situation would worsen by the end of 2016.

High malnutrition, leading to weight loss, is responsible for most of children under 5 deaths in the world.