Acasă Romania for Ukraine Bucharest has hosted a music event titled „We are One”, for Ukraine 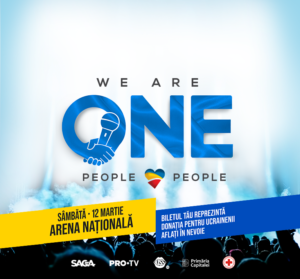 On Saturday, March 12, 2022, Bucharest’s National Arena has hosted a charitable concert titled „We are One”, to help Ukraine. All the revenues generated by the event will be transferred to the the Romanian Red Cross, which will use them to help Ukraine. Also, in order to be able to support the Ukrainian people as much as possible, donations can be made to the Romanian Red Cross, on https://crucearosie.ro/ website or by SMS, at 8825, with the text “ONE”. The lineup of the concert featured Romanian and foreign artists such as Andra, Antonia, Carla’s Dreams, Grasu XXL, Guess who, Horia Brenciu, INNA, Irina Rimes, Spike, Vama, Armin van Buuren, Tom Odell & Jamala.