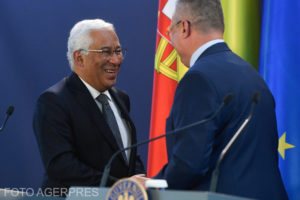 Romania and Portugal, both EU and NATO members, have proven they can count on each other and that together they can develop very good cooperation ties, Romanian PM Nicolae Ciuca said on Thursday after talks in Bucharest with his Portuguese counterpart Antonio Costa, who is on a working visit to Romania. In turn, the Portuguese official said his country supports Romania’s accession to the Schengen area and that he hopes this membership will ease the circulation of Romanians residing in his country and the exchanges between the two people. He also said that the Romanian-Portuguese accord on military cooperation signed in Bucharest will enhance bilateral military cooperation in areas such as defence planning and management, participation in bilateral and multinational military drills, cyber defence and counteracting hybrid war. PM Costa was also received by Romanian President Klaus Iohannis.